‹‹ European Union to use Esperanto
A Musical Interlude: Would You Like To Take A Walk? (Annette Hanshaw) ››

From The Wall St. Journal: 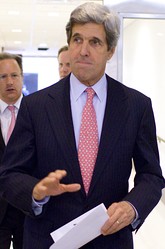 On Thursday, the chairman of the Senate Foreign Relations Committee, John Kerry, rapped Mr. Assad for not following through on his recent commitments to initiate political reforms.

“President Bashar al-Assad did not use his speech yesterday to promise concrete reforms, including lifting the emergency law,” Mr. Kerry said in a statement. “With large protests scheduled for tomorrow, it is essential that his government refrain from using violence against its own people.”

The Massachusetts Democrat has been perhaps Assad’s staunchest supporter in Washington. The two men have met a half-dozen times in recent years, according to Kerry aides, to discuss the Arab-Israeli peace process, Iraq and Lebanon. The two men have also mapped out specific ways to forge an agreement between Syria and Israel aimed at ending their dispute over the Golan Heights region.

Just two weeks ago, Mr. Kerry gave an address at the Carnegie Endowment for International Peace in Washington where he raised hopes of Mr. Assad playing a stabilizing role in the Middle East.

“President Assad has been very generous with me in terms of the discussions we have had,” Mr. Kerry said. “I think it’s incumbent on us to try to move that relationship forward in the same way.”

Mr. Kerry’s statement could presage a hardening Washington line toward Damascus as political protests are expected to continue in Syria. So far, the White House has taken a cautious approach. The U.S. has criticized the Syrian government’s use of forces against its people. But President Barack Obama’s administration hasn’t indicated it might pursue punitive measures against Syria, such as new economic sanctions, in response.

Two postings from a few years ago:

I ran into John Kerry once. I was standing on a street-corner in Woods Hole, as he was disembarking from the Forbes Family Ferry at its special dock, the one that goes back and forth to the Elizabeth Islands (all but Cuttyhunk). I smiled sweetly, as he brushed past me in his determined haste to enter the liquor store. I waited, and watched as he exited with a groaning box full of hard liquor, and he paid me no never mind, not even with a reciprocating smile. No doubt he had correctly sized me up as unlikely to be a present, or even more important, potential future contributor.

That's Kerry. Kerry of the Forbes Ferry. Kerry with a glad hand and sincere interest in some, but not in all.

I was not impressed.

On the other hand, there is always China Forbes (as in "China Trade" and "Milton, Massachusetts") to make up for John Kerry: