Israel's 'Syria option' was never one

Many Israelis assumed Assad's Iran alliance was not a happy one. On the contrary, that axis is ensuring the dictator's survival 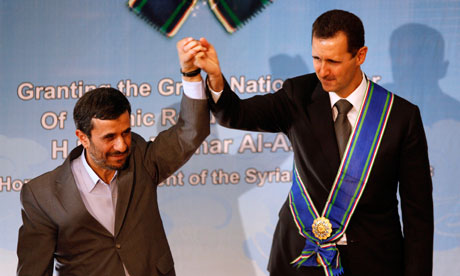 'If you mess around with Assad [right], you are issuing a challenge also to Iran [and Ahmadinejad, left] … the west doesn't want to do that.' Photograph: Vahid Salemi/AP

One early casualty of the Syrian uprising has been the "Syrian option" favoured by an influential section of Israel's policymaking elite. The case within Israel for engagement with and potential concessions to Damascus rested on a number of assumptions.

Most centrally, Syria's strategic alliance with Iran was thought of as an uncomfortable fit for the non-Islamist rulers of Syria – so it was assumed that President Assad was looking for a way out if it. Assad's relations with allied Islamist movements such as Hezbollah and Hamas were considered similarly instrumental in nature, and hence similarly susceptible to alteration. The Israeli "Syria firsters" therefore advocated a process whereby Syria would receive territorial concessions from Israel in return for a strategic realignment away from Iran and toward the US.

These assumptions were noteworthy in that they were not only untrue, but in many ways represented the precise opposite of the truth. Syria's alignment with Iran and its backing of local paramilitary and terrorist clients are not flimsy marriages of convenience. They were and are the core of a successful regional policy. Through it, Damascus has magnified its local and regional influence, and obtained an insurance policy against paying any price for its activities.

This insurance policy is now paying dividends. Syria's alignment with the regional axis led by Iran represents Assad's best hope of survival. Indeed, western fear of Iran is the crucial factor making possible the crackdown in Syria and hence the survival of the regime.

The pro-western Arab authoritarian rulers, Ben Ali of Tunisia and Hosni Mubarak of Egypt, were forced aside by a combination of internal and subsequent western pressure. Non-aligned, isolated Muammar Gaddafi now finds himself fighting in Libya against a coalition of local rebels and western air power.

Assad, by contrast, who is aligned with the coalition of anti-western states and movements led by Iran, is currently facing only nominal and minimal western pressure. This is despite the fact that he appears to be engaged in the energetic slaughter of his own people.

The US administration disapproves of the repression, but the US ambassador to Syria, Robert Ford, remains firmly in place. The British foreign secretary finds the violence unacceptable but the defence secretary makes clear that a Libya-type option is not on the cards.

This is because if you mess around with Assad, you are issuing a challenge also to Iran, Hezbollah, Hamas, and their various regional allies and interests in Iraq and further afield. The leaders of the west don't want to do that.

According to opposition reports, Iranian personnel are on the ground helping to crush the rebellion in Syria. Many Syrians believe that the snipers whose bullets are reaping a terrible toll among the protestors are Iranians. Syrian-Iranian military co-operation is formalised (a co-operation treaty was signed in 1998) and intensive. Syria gives Iran a presence on the Mediterranean, and is the key arms conduit between Tehran and its Hezbollah client in Lebanon. It is also a major recipient of Iranian arms and aid. And Iran, evidently, sticks by its allies.

Since the west's commitment to regional liberty and freedom does not appear to extend to entangling itself in a general confrontation with the Iran-led regional bloc, Assad may feel reasonably confident. Now he just needs to crush the internal challenge.

Which brings us back to our Israeli Syria-firsters. There is now an interesting split developing in this camp. Some of its members have realised the moral and political absurdities of advocating concessions to a bloodstained dictatorship (and not even a stable one) and are issuing mea culpas. Others are recommending that the west offer to underwrite Assad's regime in return for his aligning away from the Iranians.

But in the end, the Israeli "Syrian option" advocates don't matter much. Israel is not going to decide whether Assad survives or not. And Assad is not going to align away from his key Iranian guarantor – whatever his would-be Israeli friends want.

There are more crucial matters at stake here than the fate of a dead-end policy option in Israel. The Syrian dictator is currently getting away with slaughtering large numbers of his people because of western fear of Iran and its proxies. The question of whether the Arab spring stops at the borders of the Iran-led regional alliance will thus be decided in Syria.

The fall or weakening of the Assad regime in Syria would constitute a serious body blow to Iranian regional ambitions. Its resurgence under the protective tutelage of Tehran, by contrast, would prove that membership of the Iranian alliance provides a handy guarantee for autocratic rulers hoping to avoid the judgment of their peoples. In the ongoing cold war that remains the key strategic process in the Middle East, the west should see preventing this outcome as a key objective.