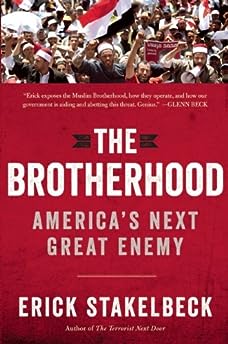 Erick Stakelbeck is an American original. A product of Northeast Philadelphia, son of a 101st Airborne Screaming Eagle vet, high school basketball champion who is now a living treasure in the American and international counter jihad community. A budding sportswriter of note following graduation from Holy Family University in Philadelphia, he had a minor epiphany after 9/11 and changed career paths. We and most Americans are glad that he did.  more>>>

Even the Muslim Brotherhood, widespread and of long standing though it is, is not the whole of what we - not just America, which is the Byzantium of the 21st century world, but the entire non-Muslim world, some seven billion humans - are facing, and which has been waging merciless and exterminating war upon us on three continents (now on six, with Australia and the two continents of the New World added to the target list) since its inception, 14 centuries ago.

What Infidel / kuffar/ non-Muslim humanity  is enduring is a continuous assault, Total War, waged by the Ummah, or Mohammedan Mob, the de facto Empire of Islam.

Within and from out of that suffused-with-Islam human gestalt - sharia-maddened,  steeped in aggression and suspicion and deceit and drunken with a megalomaniacal dream of total entitlement, entities and organisations like the Ikhwan constantly 'crystallise'.

In Patrick Sookhdeo's 'Global Jihad' several pages are devoted to a diagrammatic representation of all the assorted jihad Gangs currently in operation, and their relationships to one another and to assorted schools of Islamic thought (if one can call it thought) both Sunni and Shiite.  If every single signed-up Ikhwan member (including members of assorted wholly-owned or partly-owned franchises) dropped dead tomorrow, the breach would be filled by any number of other entities; for Jihad was being waged on three continents long, long before the modern jihad gang called the Ikhwan got itself together.  One only has to remember the Assassins to know that the likes of Al Shabaab and Al Qaeda have plenty of precedent.  Today's jihad 'swarming' attacks in Mumbai and in Westgate, Nairobi, resemble nothing so much as the jihad razzias that ravaged the coastal villages and towns of southern Europe - or the southern borderlands of Christian Russia - for centuries.

Here is former Czech PM Milos Zeman: "The enemy is the anti-civilisation spreading from North Africa to Indonesia.  Two billion people live in it, and it is financed partly from oil sales and partly from drug sales".

(In the past, I would add, it derived a great deal of its wealth from extortion - the jizya extracted from the exploited and abused near-slave non-Muslims within its boundaries, and also 'tribute' exacted from fearful and threatened neighbouring non-Muslim states - and from slavery and slave-trading - CM).