An onion dome (Russian: ?????????? ?????, lúkovichnaya glava) is a dome whose shape resembles an onion. Such domes are often larger in diameter than the drum upon which they are set, and their height usually exceeds their width. These bulbous structures taper smoothly to a point. 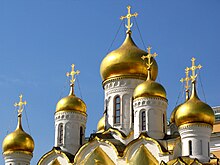 Onion domes of Cathedral of the Annunciation, Moscow Kremlin. 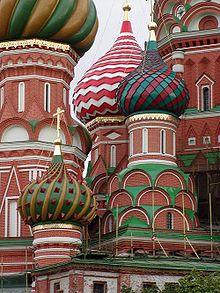 Detail of onion domes on Saint Basil's Cathedral in Moscow