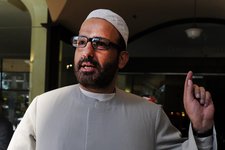 Live television images of the scene showed intense flashes of gunfire and the sound of loud ammunition rounds being fired. Police were racing into the building with weapons drawn, followed by medics with stretchers. But the number of casualties was not immediately clear.

“Sydney siege is over. More details to follow,” the New South Wales Police said in a Twitter message at about 2:45 a.m.

Just before the police entered the building, at least six hostages were seen running from the cafe.

Earlier, the police confirmed that the hostage-taker was Man Haron Monis, an Iranian-born man in his 50’s with a criminal record who called himself Sheikh Haron. Australian media reports quoted the man’s former lawyer as saying he was acting alone. But it was unclear whether the gunman had accomplices.

The siege had transfixed Australia since Monday morning, when the gunman took control of the Lindt Chocolate Cafe in central Sydney, with an unknown number of employees and customers trapped inside. The man was carrying a black flag with white Arabic script similar to those used by Islamic militants on other continents, and the flag was later displayed in the window of the cafe.

Five people, including two cafe employees, had fled by 7 p.m. Monday, but it was not clear whether the assailant had allowed them to leave or they had escaped.

Helicopters hovered over the city, the train network was temporarily stopped and strategic buildings — including the nearby Sydney Opera House, the New South Wales Parliament, the state library, law courts and the Reserve Bank — were evacuated or shut down. Traffic was stopped on part of the Sydney Harbor Bridge.

According to The Age, a national newspaper, Mr. Monis was free on bail in two separate criminal cases. He was charged in November 2013 with being an accessory before and after the fact in the murder of his ex-wife, Noleen Hayson Pal, who was stabbed and set on fire in an apartment in Werrington.

In April 2014, Mr. Monis was charged with the indecent and sexual assault of a woman in western Sydney in 2002.

The police have said that Mr. Monis held himself out as a spiritual healer and conducted business on Station Street at Wentworthville.

Mr. Monis also pleaded guilty in 2013 to 12 charges related to the sending of poison-pen letters to the families of Australian servicemen who were killed overseas, local press reports said.

A website apparently associated with Mr. Monis includes condemnation of the United States and Australia for their military actions against Islamic militants in Iraq and Afghanistan.

A Muslim community leader in Sydney, Dr. Jamal Rifi, said in a televised interview that “everything he stands for is wrong.” “It has nothing to do with Islam as a religion whatsoever, and we have all seen that by his previous action and his current actions,” Mr. Rifi said of Mr. Monis.

Submit Your Comment
Posted on 12/15/2014 10:02 AM by Rebecca Bynum
Permanent Link   |   Email Article   |   Print   |   Back to Top
Comments
15 Dec 2014 Yosef S A Sunni refugee from Iran? Iran is a multi-ethnic empire. Only half the country is Persian. The Balochi's are predominately Sunni. There are other Sunni groups as well.